Sr Dona donates kidney to save Sr Anitha, her sibling

Sr Dona donates kidney to save Sr Anitha, her sibling

In a rare incident, a nun saved the life of another nun, who also happens to be her sibling, by donating her kidney. Sr Dona Rose, 49, belonging to the Congregation of the Mother of Carmel’s Holy Queen’s province Of Changanassery donated the organ to Sr Anitha Jose, 56, of the same religious order. An inmate of Carmel Sadan, Thellakom in Kottayam, Anitha was suffering from renal failure since March and transplantation was the only option, according to doctors. “The moment the doctors advised kidney transplantation, I readily agreed as I wanted to save the life of my elder sister,” said Dona. “Being a nun, I had to get the permission of the Church, which was granted without any delay.” As the number of kidney failure cases is rising, people should come forward to donate the organ and save lives, said the nun. The kidney was harvested and transplanted on May 12 by a medical team of VPS Lakeshore, Kochi, comprising Dr Abi Abraham M, director of the nephrology department; Dr George P Abraham, head of the urology department and Dr Mohan A Mathew, chief of anaesthesia and critical care. While Dona was discharged on Wednesday, her sister will be shifted from the intensive care unit within a few days. 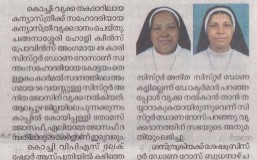 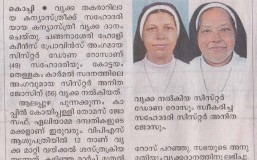 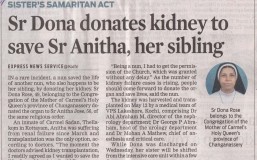 Kidney transplantation is the best modality of treatment for end-stage kidney failure. In this treatment,…

Kidney transplantation is the best modality of treatment for end-stage kidney failure. In this treatment,…

Early in the course of kidney failure (also called renal failure), treatment is required to…

When the body swells? / Swelling of the body

When the body swells? / Swelling of the body

Swelling of the body causes considerable amount of apprehension in people. Odema is the medical…

What is diabetes mellitus?

What is diabetes mellitus?

Urinary infection is defined as infection in the urine. Bacteria do not normally live in…

A kidney stone is a structure formed when there is an increased concentration of substances,…

Dr Abi Abraham M recognized nationally as well as internationally as an expert in the field of nephrology and kidney transplantation. He has more than 23 years of experience both as a clinician and academician. He has a wide range of experience in renal transplantation, critical care nephrology, vasculitis, lupus and electrolyte disorders. He has been awarded three prestigious fellowships, has widely cited publications in peer-reviewed journals, memberships in many renal societies and held administrative positions in organizations..

get in touch with us